At the Hohen Markt in the old town of Krems on the Danube is the starting point for Stage 1 of the World Heritage Trail. 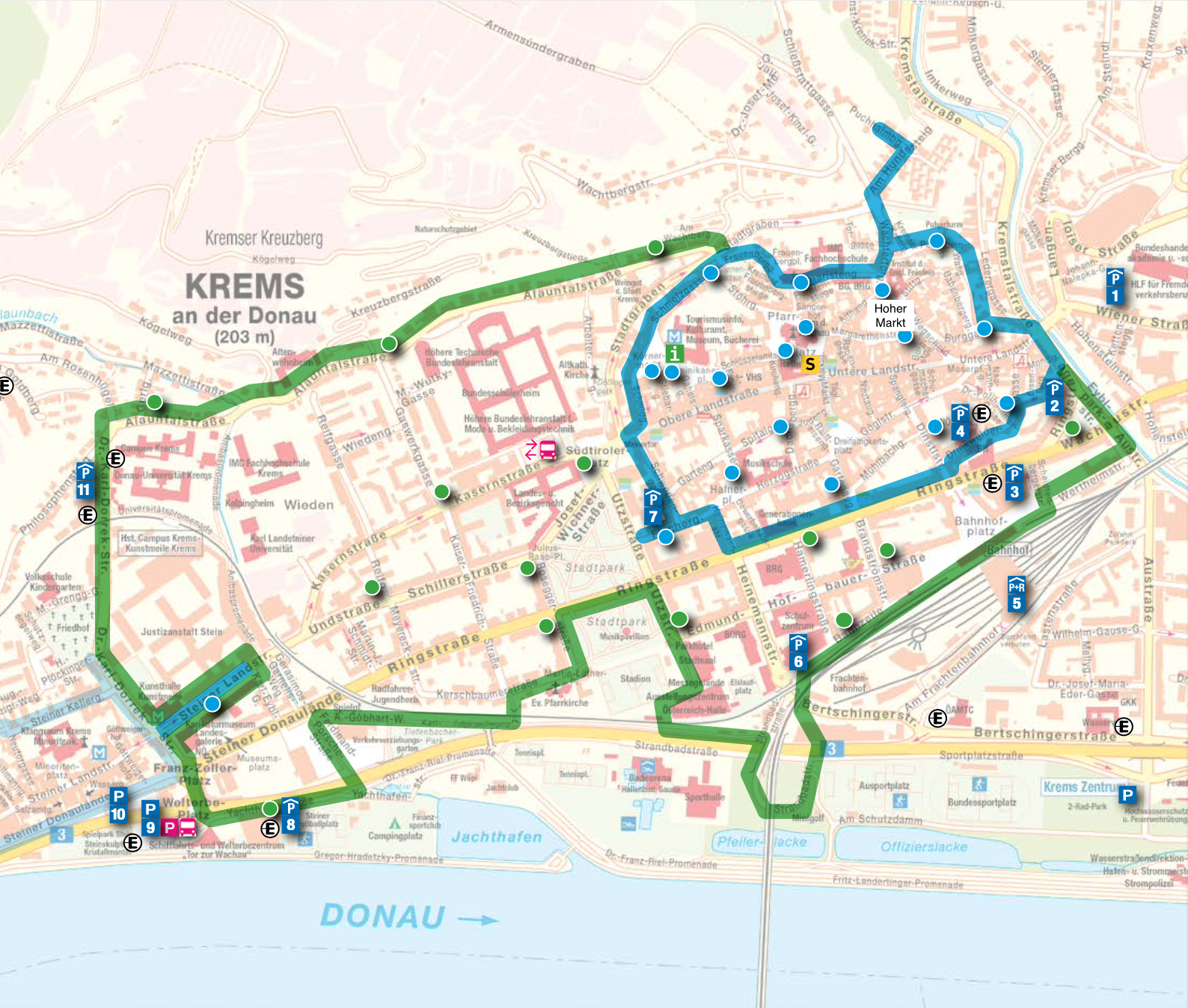 Krems has a Blue and a Green Zone.

Where can I park my car?

You can pay with your mobile phone using one of the following apps: HANDY Parken A1, EasyPark or ParkNow. When parking with a mobile phone, the Blue Zone corresponds to Zone 1 and the Green Zone to Zone 2. 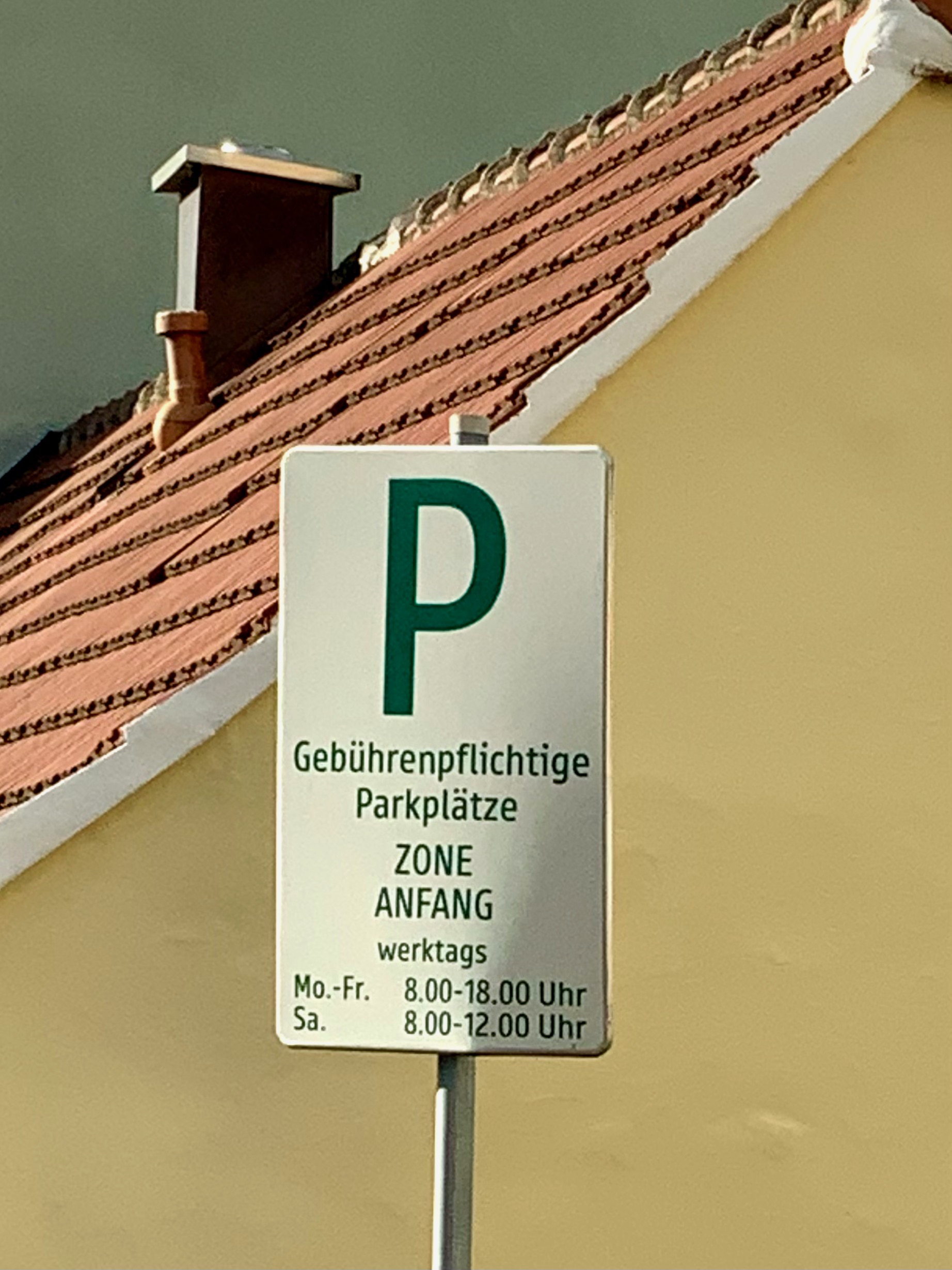 You can park for free at the Park and Ride car park, which is located at the beginning of Strandbadstrasse. From there you can walk to the starting point of stage 1 at Hohen Markt in Krems as shown in the map below.

This is the French Monument. 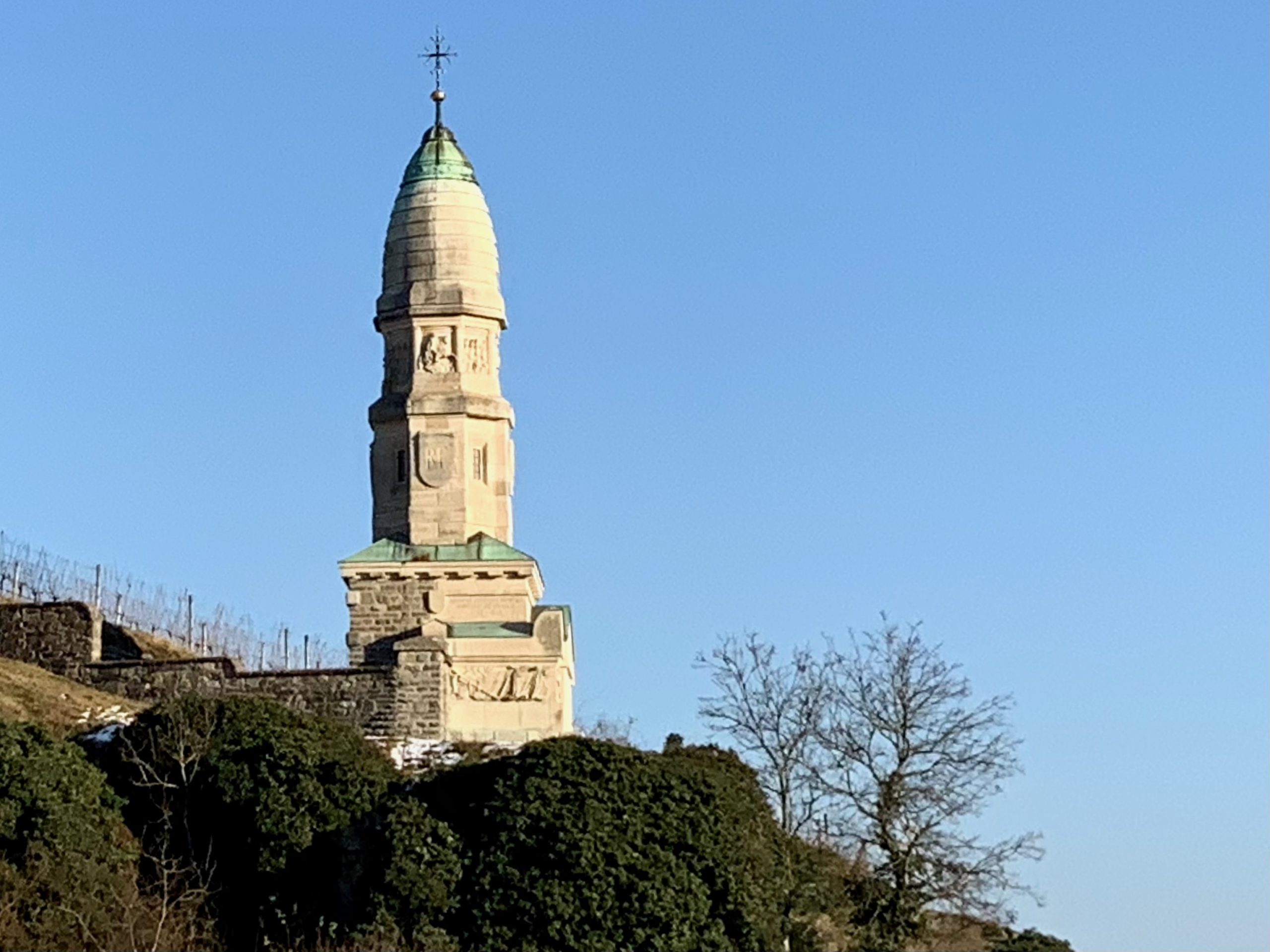 In the Loiben plain near Dürnstein at the foot of the Höhereck, where the position of the French Marshal Mortier was, there is a monument that can be seen from afar, the upper part of which is in the shape of a cartridge. The French monument is intended to commemorate the Battle of Loiben in 1805 on November 11th, St. Martin’s Day, the feast of St. Martin of Tours. In the Wachau there is a lantern parade on Martin’s Day, children parade through the streets with homemade lanterns and sing, a popular custom.

Saint Martin died in 397 near Tours, a city of the Frankish Empire on the Loire, between Orléans and the Atlantic, which was the center of the Carolingian Renaissance under Charlemagne. During his time as a Roman soldier in France, Martin was a rider in the Imperial Guard from 334. In winter he met a freezing beggar near Amiens, north of Paris on the Somme. Since Martin had nothing with him to warm the poor man, he shared his own coat and gave the poor man one half.

In 1805, the year of the battle, the road from Dürnstein to Krems ran in the middle of the valley floor, lined with stone-walled vineyards that were an obstacle for carts and artillery. At this time of year, the paths were also already iced over. In the course of the French Revolution, the monarchy was abolished, which countries like Austria along with Great Britain, Russia and Sweden called on to fight against it.

After the Battle of Ulm, which took place between October 8 and 20, 1805, a large part of the French troops marched south of the Danube towards Vienna. They wanted to put the Allied troops in battle before they arrived in Vienna and before they were united with the 2nd and 3rd Russian Armies. A corps under Marshal Mortier was supposed to cover the left flank, but the battle in the plain of Loiben was decided for the Allies after they were led by a local hunter from Krems to the north-west to over 400 m above sea level and from there continued in a south-westerly direction through the Pfaffental, back to the Danube at Watstein. From there they could attack the French in Dürnstein from behind.

Due to the encirclement, the French could only escape on their ships on the Danube and to the right side of the river and over the castle ruins, which were left unoccupied by the Russians, to Scheibenhof and from there on to Spitz. After there were many casualties on both sides in this battle, a monument was erected in 1905, 100 years after the Battle of Dürnstein on November 11, 1805, on which the commanders of the French, Russian and Austrian troops are depicted in relief and inscriptions in German, French and Russian remember the event.